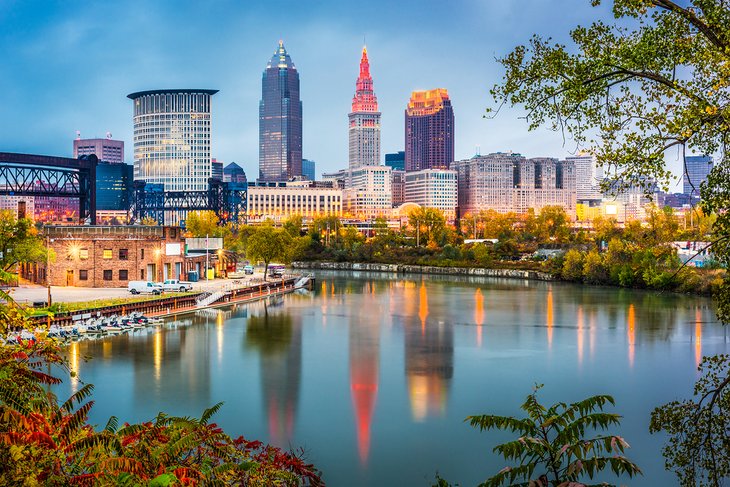 If you’re visiting Cleveland for a vacation or on business, there are a few sights you should see. Cleveland, Ohio’s second-largest city, exemplifies modernism with a rustic flair. The city boasts a vibrant cultural scene at the Flats East Bank, where the Cuyahoga River and Lake Erie meet, including theatres, museums, and a flourishing social scene. There is no shortage of things to do for visitors.

Cleveland was one of the most important canal ports in the eastern United States in the 1800s, as well as an industrial center where some of America’s wealthiest businessmen made their fortunes. Millionaires’ Row, a stretch of Euclid Avenue famed for its opulent homes, is a monument to their wealth. John D. Rockefeller, the founder of the Standard Oil Company, and Samuel Mather, who built his fortune in steel manufacture and transportation, were among those who lived here around the turn of the century.

Today, the ruins of Cleveland’s old railway and canal fame serve as a colorful background for a bustling city that is converting warehouses into boutique hotels and hosting world-class sporting events and concerts near the waterfront. Take a stroll through Cleveland’s famed Historic Warehouse District, spend an evening at one of the city’s main sports complexes in the Historic Gateway District, or visit one of the city’s many fantastic museums and other attractions.  So, if you are planning to explore this city. Without any doubt, make frontier airlines booking in any class and save up to 35% off on one-way & round trips. The below-mentioned details shall help you to visit the best places when you are here in Cleveland.

The Cleveland Aquarium is housed in the FirstEnergy Powerhouse, one of the city’s most significant structures. The true draw, though, is on the inside, where you’ll be treated to a variety of colorful and unique deep-sea species. The museum features nine halls, each with approximately 50 displays and 2,500 animals representing 300 distinct species. There are animal encounters available, such as getting up and personal with stingrays and touching a blue-tongued skink in the petting tank.

Enjoy a Performance at the Playhouse Square

The Cleveland Museum of Contemporary Art, also known as the MOCA, hosts rotating, temporary exhibits by national and international artists as well as local Cleveland artists. Farshid Moussavi designed the museum’s new building, which opened in 2012, and it is a one-of-a-kind and spectacular edifice. This mirror-finished building starts as a hexagon on the bottom and climbs to become a square at the top, resulting in a variety of angles.

The Cleveland Metroparks Zoo is one of the country’s oldest zoos. The zoo, which is near Brookside Metropolitan Park, houses domestic and exotic animals from all over the world, including North America’s largest collection of primate species. You can spend time at the 4D Theater or participate in one of the many behind-the-scenes activities and seasonal programs in addition to admiring the many updated animal displays. The Cleveland Metroparks Zoo is also a botanic garden with lovely foliage all year.

A visit to the Great Lakes Science Center is an informative experience that will pique your interest in topics such as space travel and wind. Hundreds of interactive displays are available to keep visitors of all ages entertained. Visitors can explore the 1925 steamship William G. Mather from spring through fall to learn about life on board and the history of the Great Lakes.

The Cleveland Museum of Natural History has some fantastic displays on highlighting collections and research in fields ranging from paleontology to botany. The most famous attraction of these is that of Australopithecus afarensis, also known as “Lucy,” a three-million-year-old human ancestor who was a crucial finding in the study of anthropology. The dinosaur skeletons that tower over visitors as they walk through the Kirtland Hall of Prehistoric Life are perhaps more visually striking.

This WWII submarine has a long and illustrious history of combat and rescue. In 1945, it was responsible for the world’s first submarine-to-submarine rescue. During the summer, you are welcome to visit the USS Cod and board the ship. Because it hasn’t been modified since WWII, access is through the original hatchways.

The greatest spot to stay in Cleveland for entertainment and sightseeing is right downtown. The Rock and Roll Hall of Fame and the Great Lakes Science Center are both located on the water’s edge. So what are you waiting for? Pack your bags and plan your trip with AirlinesMap and head to USA this year from this travel list.