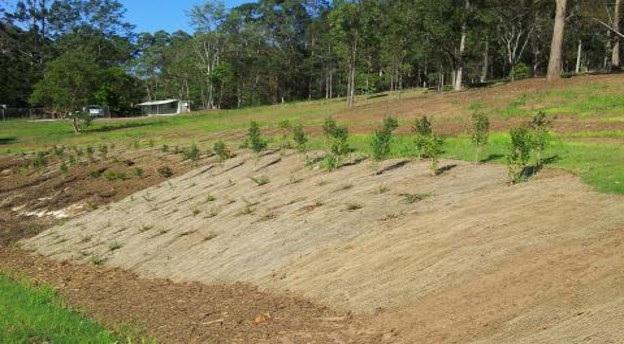 Coconut geotextile is a natural material and a permeable textile material used to improve soil characteristics. It has the ability to separate, filter, strengthen, protect and drain when used in combination with soil. Coconut Geotextile is an ideal material for many infrastructure works such as roads, ports, landfills, drainage facilities and other civil projects.

Coir geotextile is made from coconut fiber, which is processed by shredding it in a coir shredding machine. The coconut fiber is cut into small pieces and then sifted with a coconut fiber sifter to obtain individual fibers. This fiber is then spun on a spinning machine, the diameter of which can be adjusted as needed.

Coconut geotextile is made from coconut fiber that has gone through various processes. Being a natural product, coconut geotextile is biodegradable and environmentally friendly. According to the method of preparation, they are divided into 2 categories:

This form is the simplest. Coconut geotextiles are traditionally handcrafted using the twin-rod weaving technique. This form is mainly used for erosion control. Most of these variations are made depending on the intensity of precipitation, soil type and surface slope. Each variety can be identified by weight per m2 and yarn type.

Coir type geotextile is often referred to as coconut fiber filter cloth. It is made from the same materials as coconut non-woven geotextile in the form of felt, not weaving. Coconut fibers are pressed and heated with a special adhesive.

Generally, both types of coir geotextile perform the same function. That’s just their use depends on the type of soil and the purpose of the structure being built.

How coconut geotextile performs in any application is defined by three separate functions:

Firstly, the advantage of coconut geotextile is that it has good extensibility and can withstand the resulting frictional force, so it is very convenient to use as a separator between soft soil and the pavement above.

A layer of non-woven coconut geotextile is impregnated between the existing and new asphalt layers. The geotextile absorbs asphalt to form a waterproofing membrane, minimizing vertical water flow in the pavement structure.

The scope of coconut geotextile in the field of mechanical engineering is very wide. The application of coir geotextile is given under the heading “Nature of work”.

It can be seen from the above coco geotextile and features that there is a big difference between features and applications. These various functions can be performed mainly by coir geotextiles.